What is a blue zone??

A blue zone is an anthropological concept that describes the characteristic lifestyles and environments of the world's longest-lived people. This term was first introduced in National Geographic, 2005 in a story by Dan Buettner. He then wrote 2 books on blue zones: “The blue zones: Lessons for Living Longer from the People Who've Lived the Longest” and “The blue zones Solution: Eating and Living Like the World’s Healthiest People.”

Sardinia is 1 of only 5 regions in the entire world to define as a blue zone. It is the 2nd largest Italian island, located in the Mediterranean Sea. There are 10 times more centenarians living in Sardinia, than in America. These centenarians aren’t just barely living past 100 years old, they're thriving! Some elders of 102 years old are still riding bikes through their village to work. Their Sardinia Secret is below...
To clarify we are not affiliated with Blue Zone, LLC. 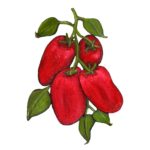 We are letting you in on the Sardinian secret, by bringing a piece of the blue zone to you - Posardi tomatoes!

In America, only 1 out of 5,000 people live to be 100 years old - that is 10 times less than Sardinia. It was founded that one Sardinian secret to living a long life is what they eat. They mostly eat plant based diets and one key staple is their Sardinian tomatoes. Besides trying to live a healthy lifestyle, take advantage of having Sardinian tomatoes available in the U.S. for the first time and add Posardi to your diet today!